WIMAfrica Participates at the retreat of the Africa Blue Economy Strategy

African Women in Maritime participated in the presentation at the retreat of the Africa Blue Economy Strategy in Nairobi, Kenya. 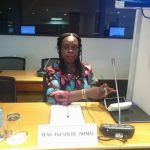 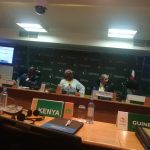 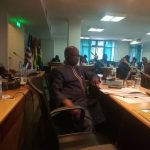 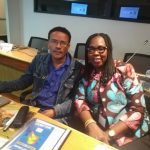 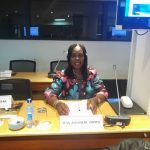 WIMAfrica also gave the below presentation at the opening ceremony of the retreat.

The blue economy has since become a promotion for both the preservation and sustainable use of the oceans, which ensures the Earth’s survival as well as the opening up for a new growth engine.

Protecting our oceans is no longer a field of debate but an actual necessity as our oceans hold 90 per cent of all earth’s water and generates over half of the oxygen we breath, regulating the Earth’s climate and providing food and income for billions of people, among other things. Several efforts have been done in recent years in order to protect marine life, one being the blue economy concept.

I am particularly happy that the African Union has gone a step further in calling for operationalization of the Blue Economy Strategy. This will place on each of us the urgency to ensure that we play our respective roles in maximizing the many potentials of Africa’s Blue Economy.

The Discourse on gender has evolved since the concept was introduced almost forty years ago. There has been a gradual transition from the traditional role for women as mothers and teachers of primary school children. More women want to be at the forefront, achieving as much as a man would, in any career.

Gender equality is of much concern today as it was in 1995 when the United Nations adopted the Beijing Platform for Action, a blueprint for advancing women’s rights. Since then, through movements, organizations, and governments, people have been striving for gender equality.

Pressure groups, different organizations and other maritime stakeholders are beginning to sound the trumpet for the need for an all-inclusive gender-based policy.

To assume it is an abomination for a woman to go to sea no longer holds sway in our current dispensation; yet we cannot be oblivious of the fact that there remain some other forms of discrimination against women, which is still a problem in most developing countries, especially in Africa.

Whilst recognizing that there is still a long way to go to achieve gender equality in the maritime industry, gradual but encouraging progress is being made in this area, particularly over the last decade. For example, the creation of African Women in Maritime Organization by the then Chairperson of the African Union, Her Excellency, Dr Nkosazana Dlamini-Zuma.

Thus as the baby if the African Union, we are committed to ensuring a gender-inclusive maritime sector. To effectively achieve this, we are enjoining “Parents” to include us in the scheme of things in determining the operationalization of the Blue Economy Strategy.

One important approach we must not overlook in operationalizing the Blue Economy Strategy, is the need for more education, awareness, and training, to encourage females into this industry; not forgetting that we also have competent and professional women already in the industry; whose experience and expertise will go a long way in driving a sustainable development in the Blue Economy.

The recognition of women’s importance and women’s indispensable participation to our Continent’s progress especially in the maritime industry goes without saying. We, therefore, state that we are expectant and fully ready to play our part in ensuring that Africa’s Blue Economy becomes the envy of the world.